For those that don’t know it, Mt Desert Island is an island off of the coast of Maine, connected by a causeway. One gets to it from the west and south, via Ellsworth,  which marks the end of Mid-coast Maine, and the beginning of the upper coast. From Ellsworth north one is “Down East”.

Mount Desert is also the home of Acadia National Park. The island is a mix of small towns, private land, and the park. It is also the home to the Jackson Lab, Mt. Desert Island Bio Lab, and the College of the Atlantic, among other things. There are motels, farms, yacht clubs,  lobster pounds, and summer cottages. The island population is about 10,000 people, but 2 – 2.5 million people visit the during the summer. Considering that the island is  is 15 miles (24 km) long and about 8 miles (13 km) wide, about 108 square miles, that is a lot of people!  But with 24 mountain peaks, 45 miles of carriage roads, 125 miles of hiking trails,  off-shore islands, and miles of coastline,  there is plenty of room to spread out.

People come by boat, plane, bus, and car. The majority of the activity centers in and around Bar Harbor and the the park.  There are hiking trails, carriage trails, mountains to bike up, hike up, or run up, One can sail, canoe, or kayak. One can shop in Bar Harbor, Northeast Harbor, or Southwest Harbor.  Or one can just sit.  In short Mount Desert is a microcosm with something for everyone.

As I started off the day was over-cast, with rain in the forecast. My first stop was Camden. I had not been there in a while, and I wanted to see if the boats were all covered. 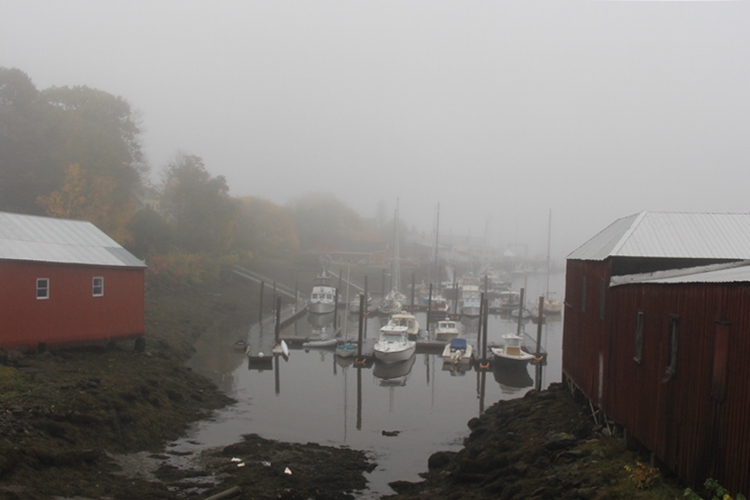 The tide was out,
harbor was socked in with fog.

Most of the windjammers were covered for the winter.
In the mist they had a ghostly appearance.

Beyond the harbor,
the fall colors glowed.

I continued up the coast,
stopping in Lincolnville Beach,
where a dory filled with petunias was still in bloom. 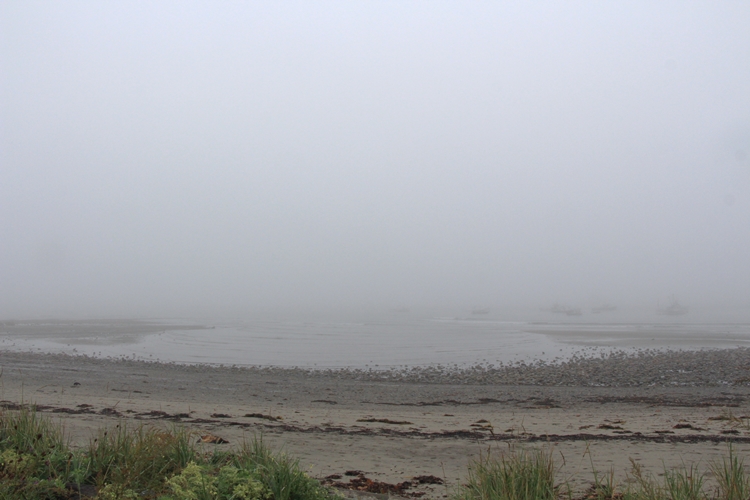 The ferry pier at Lincolnville Beach was just visible. 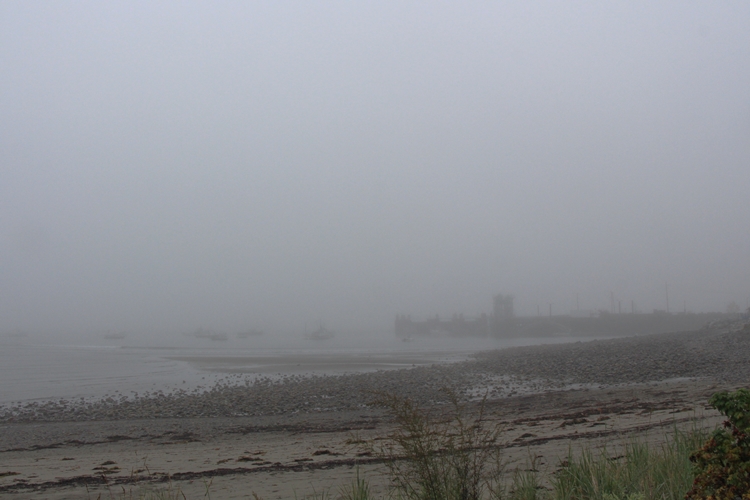 As the whole coast was socked in,
I decided to just head on up to the island.

I decided to follow a smaller road along the top of it.
So, leaving the Bar Harbor Road I turned down Bayview Drive.

As I drove along the top of the island,
it looked as if the fog was lifting! 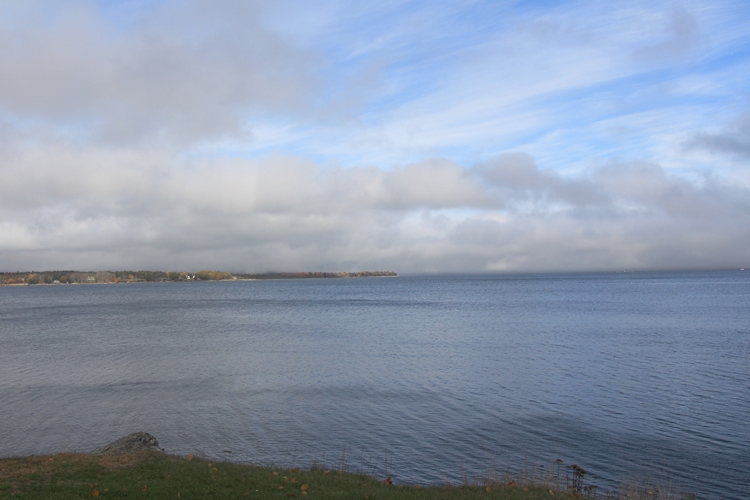 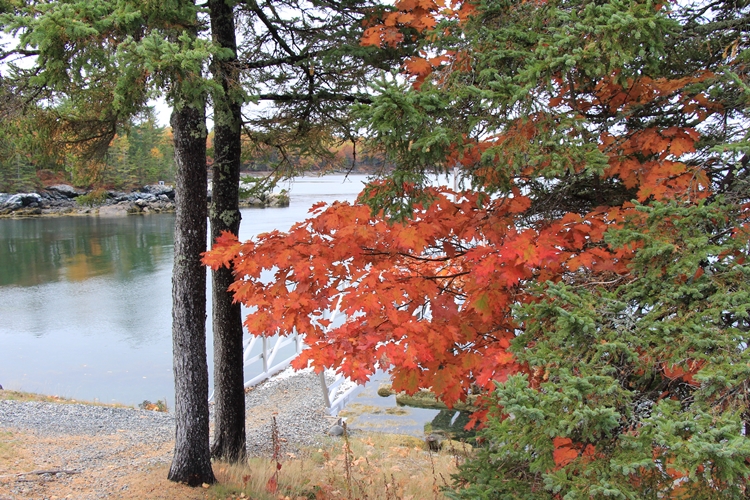 And the trees literally glowed around the Edgewater Motel. 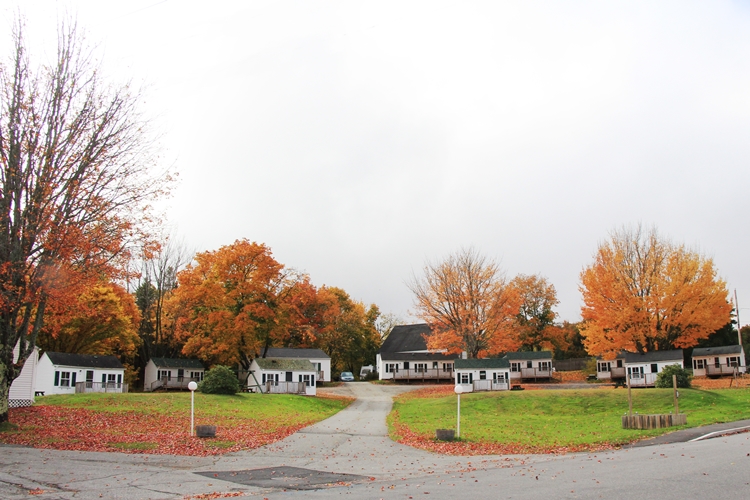 I always take the upper road into town.
Looking out toward Bar Harbor the fog had moved back in.

It washed over the tops of the mountains. 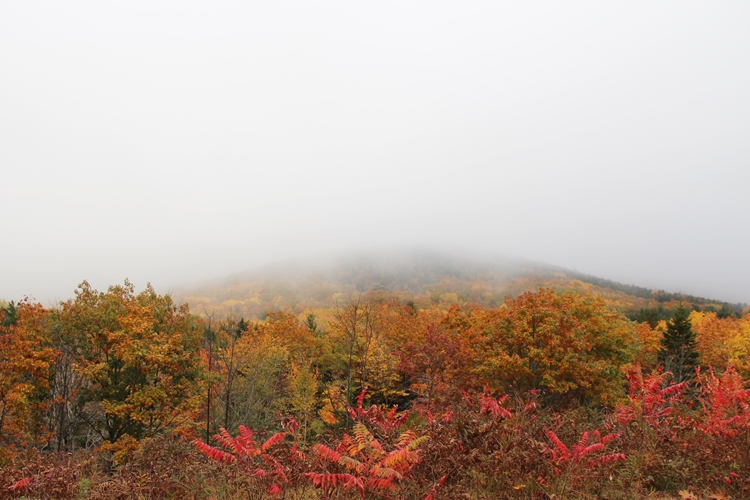 It was going to be a foggy, rain washed weekend.

After arriving at the inn I decided to go to the bookstore for reading material.
I took the Shore Path back into town, past the Balance Rock.

The tide was coming in, making small whirlpools around the rocks. 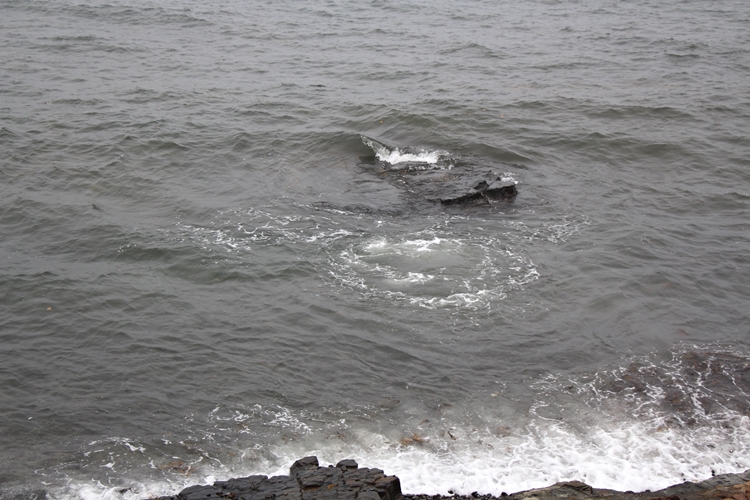 The beaches here are composed of  rocks.
While there is one beach with sand on the island,
Sand Beach, in the park,
sandy beaches are not the norm.

So, one sees  a lot of cairns. 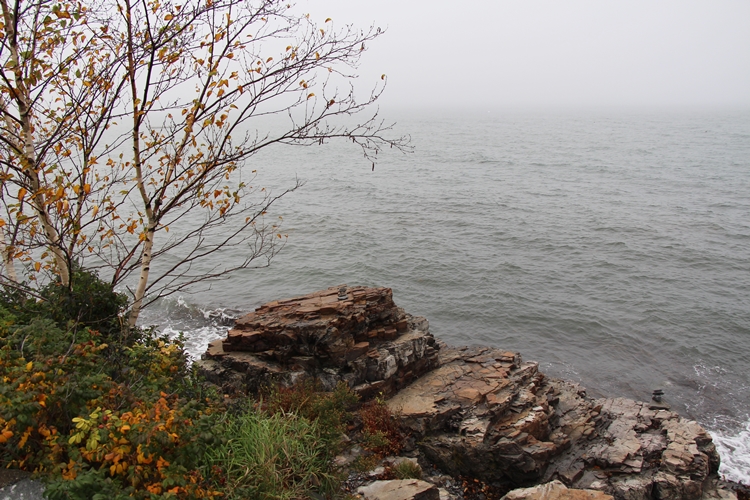 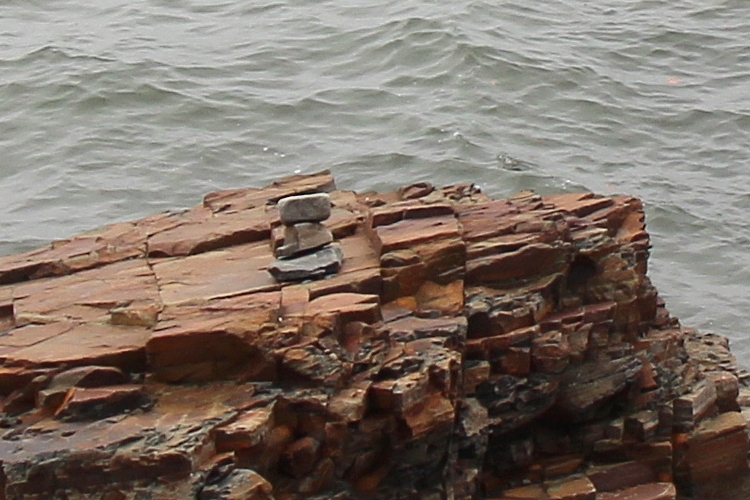 This one is out on the edge! 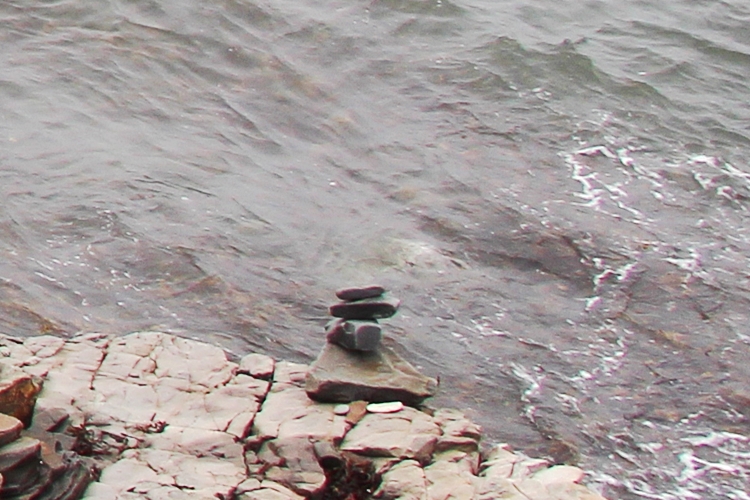 In town Bar Island swam in a sea of fog. 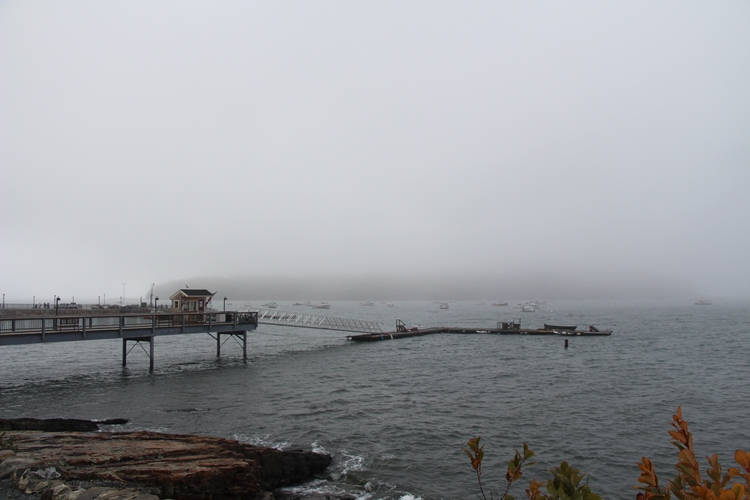 Sherman’s Bookstore is on Main Street.
There are now six locations of it in Maine,
but, the Bar Harbor store is my favorite.

It is the original store,
and has been in the same building since 1886!
Though no longer owned by the Shermans,
it is still owned by the same family that bought it from them in 1962.

I tend to go back to the store several times during a visit,
walking one way or other on the shore path,
and the other along Main Street.

Browsing through Sherman’s I found books by Elisabeth Ogilvie,
a Maine authoress I’d not heard of.
I spent a quiet afternoon reading and watching the fog.

The next morning it was foggy and rainy.
The tide was well out when I walked into town.

Despite the fog I wanted to drive around to Northwest Harbor.

The autumn colors were interspersed
with the deep green of evergreens.

Above the Tarn, the steep granite sides of Dorr Mountain
show through the trees. 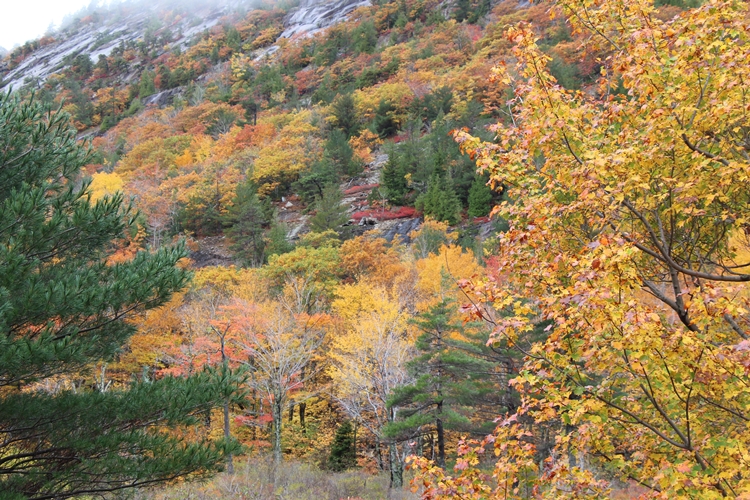 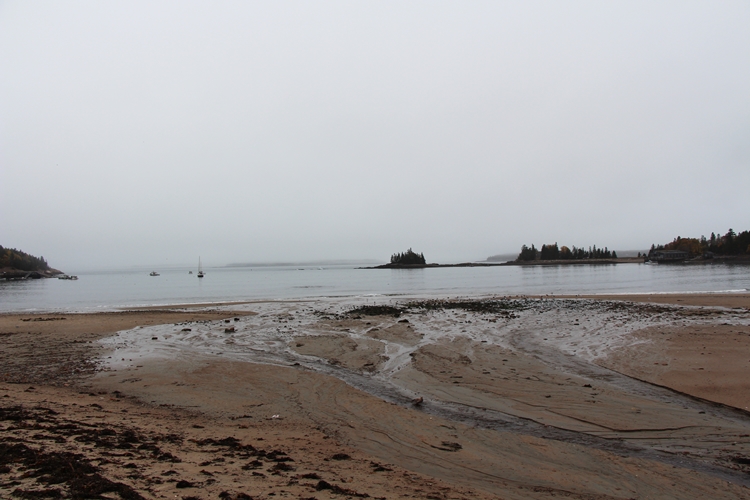 Continuing along to Seal Harbor
one could see the bank of fog hanging off the coast. 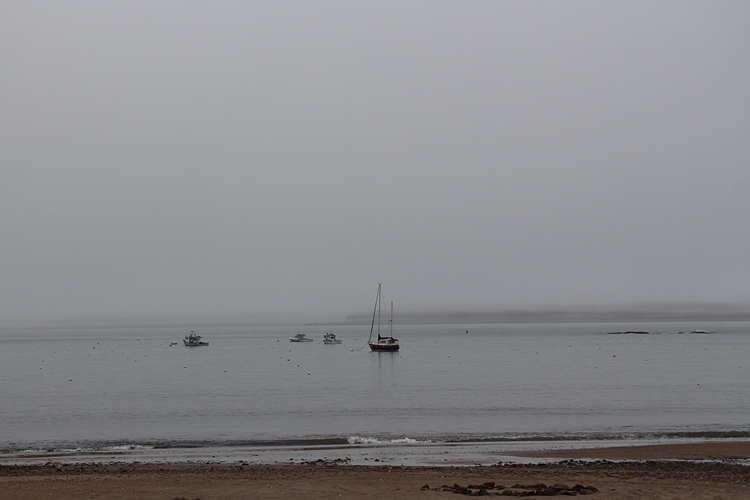 The tide had just turned. 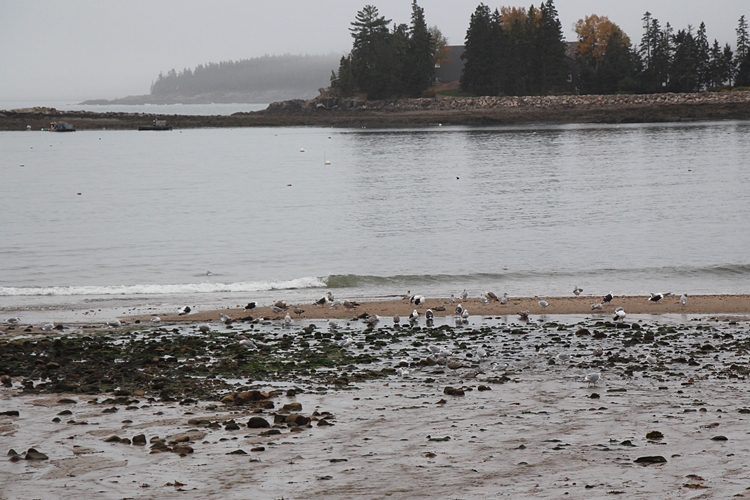 Birds picked over seaweed and rocks,
looking for food. 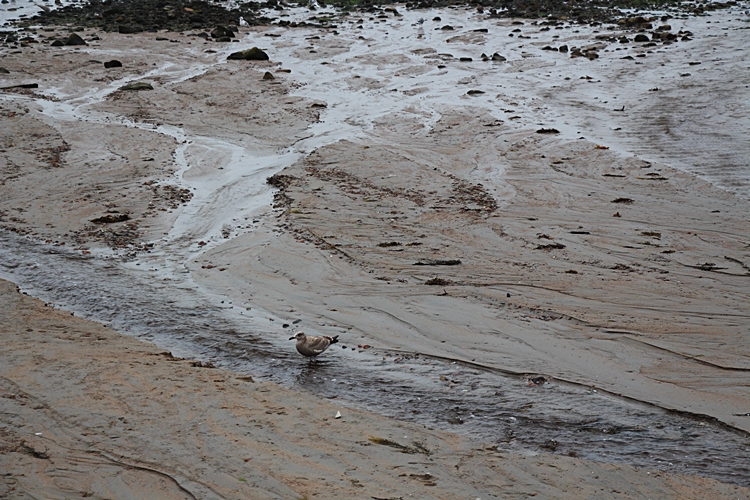 I went along to Northeast Harbor,
mostly out of curiosity as to what would still be open-
most of the island shuts down in mid-October.

The Kimball shops,
which have been around since the ’30’s, were.
And, I was able to get quite a lot of Christmas shopping done!

A lone boat putted gently up Somes Sound on the coming tide.
Except for the engine, all was quiet and still in the fog and rain. 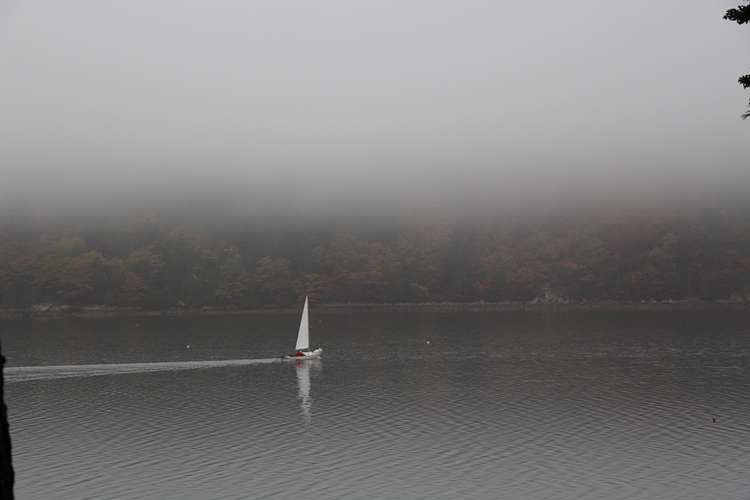 Somes Sound is a deep body of water
that used to be designated as a Fjord.
It has been re-defined as a Fjard,
which has a less deep, but broader profile
than a Fjord.

The deepest point is about 175′ deep.

At the head of Somes Sound is Somes Harbor.
And, there is the town of Somesville.

Somesville is as cute a village as one will see!
To see it is to want to move there!

Leaving Somesville I headed down to Southwest Harbor for lunch.
Only one place was open, and it was packed, so I went back to Bar Harbor.

The afternoon was spent with a book in front of the fireplace at the inn.

That night it blew hard, a cruise boat had to be moved it blew so hard!
And it poured!
And the whole town lost power for a while!

The next morning it was still blowing and raining.
I cut my time a bit short,
and headed home.

As I crossed to the mainland I stopped at Thompson Island.
The wind was still blowing hard,
with a running surf up the western narrows. 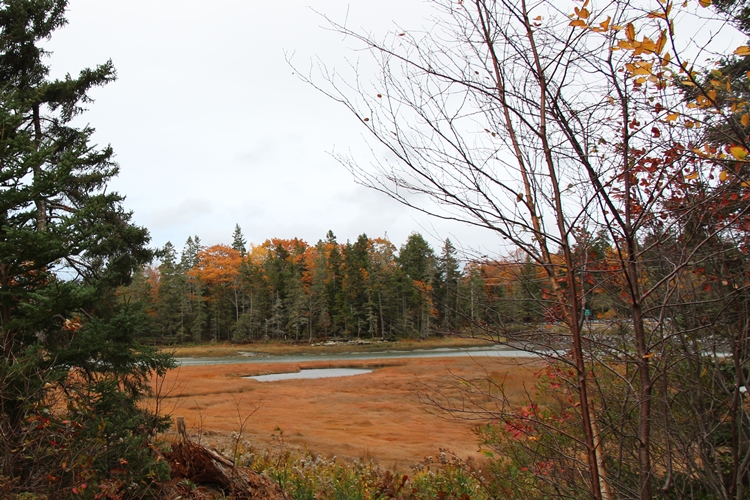 It was going to be a nice day after all. 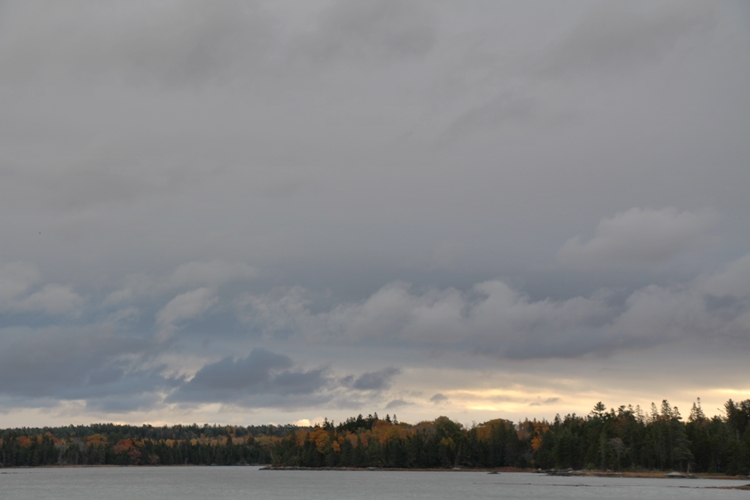