There is a saying in Maine- “A January thaw will freeze a hog.” And I have to admit- that confounded me 40 years ago, and it still confounds me! But, the January thaw is here. And it does happen every year. Sometimes it lasts for a couple of days, other times longer, but it does always happen!

Yesterday the temperature rose. And last night the wind was really howling down the hill, past the brick house. This morning most of the snow is gone. The wind has died down, and the sun is out!

One is always glad of the thaw. It gives one a much needed break from the winter’s cold and dark days. And, even though the thaw is fleeting, and we know that February is coming, with it’s very cold days, by the end of the month, the day will be an hour lighter! 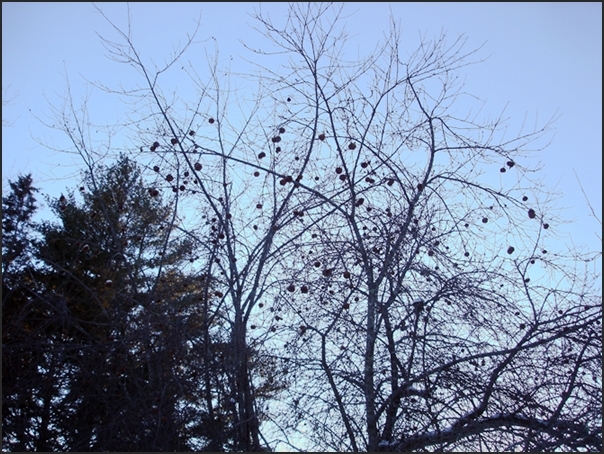 Apples that did not fall
are withered and brown from
the constant freezing and thawing
we have had this winter.

During the thaw squirrels race around gathering more food, the roads develop incredible uneveness and pot holes, people dig out everything that needs to be dug from snow banks… that includes mail boxes, Christmas decorations, etc. Basically, like the squirrels, it is a time to regroup for the rest of the winter that is coming.

The forecast for the rest of this week is sunny, so we hope to photograph a lot of new fabrics and some destash pieces.

Well, the best laid plans do go awry. My camera died. One can’t blame it… it has to be at least ten years old, and has taken thousands and thousands of pictures. It has been subjected to rain, snow, and sand. It has sat in my purse on walks in fields, at beach, and in the desert.

So, right in the middle of taking the last image for a fabric… it quit. We tried resuscitation, but nada… so, a quick trip to the store is in order, as without a camera, nothing happens!