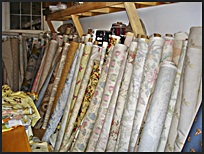 One of the things that people find difficult to understand is the different prices they see for what they think is the same fabric. The feeling seems to be if you see a fabric at a big box store for one price, other fabric stores should be charging the same price.

Fabric companies are in business, as was said before, to sell fabric. That is what they do. They spend a lot of money developing not only new patterns, but new types of fabric. There are fabrics for the automotive business, the boat business, fire retentive fabrics now used by institutions such as schools and hospitals. These all cost to be brought into existence. And the fabric companies are at the mercy of world wide trading issues. Last year the cost of both cotton and linen went sky high. Add to that the cost of moving the fabric around, and yes, fabric this year is more expensive. I got an email from a stool maker in Germany asking why a fabric had suddenly gone up. I said there had been a price hike, and that I expected another one this year. The companies are not trying to kill the small retailer. Some hold the line as long as they can. But, like the small retailer, they are squished as well. And those costs get past right down the line.

So, why else are there such differences in pricing?

The first reason is that the fabrics you are comparing were bought at different times. You see a fabric for sale, which was bought two years ago, when it was cheaper. You see it somewhere else, where the store just recently bought it, and they paid more for it due to price hikes. Most companies do a yearly price increase around the first of January, each year. If you are on top of things you put in your order for fabrics in December, before the price hike. Sometimes there are other price increases… a few years ago when oil prices escalated there was an additional price increase in July. Some companies give one advance notice to give a retailer a chance to put in orders before the increase, but not all do.

Another reason has to do with the amount of discount a buyer gets, and the amount of money they wish to make. I buy fabric and I get whatever discount a company allows me. But, a large retailer, ordering hundreds of bolts a year, will get a larger discount. They can then either charge less to move it, or charge the same as I would and make a larger profit. I know of one large company, that is very happy to make a short profit as they are moving things very quickly; their buying level gives them a larger discount than a small retailer, enabling them to do so. That is life… But, it does cause confusion for the person who sees the fabric one place for less than another store is pricing the same fabric.

A lady I know was redoing her house. She had some fabric, that she loved, but it had been discontinued. She found some online at a discount store, bought it sight unseen, did not ask for a sample, and the fabric was not returnable. She had asked if the pattern and background color were the same as what she already owned. The seller said as far as she knew. The lady received the fabric, and it was very different. The lady was not happy when the ground cloth and the color were different. I told her it was not the seller’s fault. She probably never had a sample of the original first quality fabric from the company; maybe she did not even carry that company. There are several reasons for this to happen.

The most obvious is a dye lot issue. But, there are other things that might have happened as well.

Say a curtain company decides they want to do a curtains in a certain pattern. They don’t need the same kind of fabric as would be used for upholstering a chair. And say the original pattern had 17 colors on the original first quality fabric, 5 of them blues. They want to do produce the curtains as cheaply as possible. So, they use a different,, less expensive ground cloth, one not made and finished the same way as the original, and they decide to get rid of 3 of the blues to cut costs. This is called down printing. The fabric company runs the fabric. This is a special run, for that curtain company. The curtain company makes the curtains, but there is extra fabric. They then sell that fabric, as their money is out. So, they do.

And it gets picked up to be resold at a discount price. Looking at the fabric online, or even in a store, without the original next to it, one might jump to the conclusion that this was the original fabric from the company that originally manufactured it. But, while it is the same pattern, it has different colors on a different ground cloth- not the same at all. One’s brain often will trick us that way. I recently had a person buy a fabric. The listing gave the colors: grey, orange, and sage with brown. She had it in a brown colorway without any orange or green. But, she say the design, and thought it was the same. So, when trying to match something, take the time to check the fabric again your fabric.

Another reason might be that the fabric is a second, which got dumped. The seconds come out of the mill, and are sold or auctioned to companies who then turn around and resell them. They may be perfectly useable for nearly anything. But, they are not first quality. And as someone who does not like fabric issues, or customers being unhappy, we try to stay away from them! We would rather a person opened a package and sighed with happiness, rather than bursting into tears. If we see a flaw, we either cut on the flaw, or put it in the listing so one knows what the issue is.