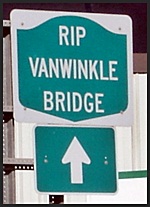 When two people run two businesses out of a home, each person tends to wear more than one hat- or several for each business. And that is the case at Brick House Fabrics. Whether dealing with fabric or other things, we both pitch in. Thus it was that we ended up in New York State last weekend.

The object was an auction in Hudson, New York. Heading out on Friday we ran into a tremendous rainstorm, that lasted all the way across Massachusetts. We figured the whole weekend would be a washout… we were pleasantly surprised!

Hudson is a small town, about 35 minutes south of Albany, on the eastern side of the Hudson River. The google map directions had us get off before the NY Thruway to take obscure roads without any signs, meaning, we got lost. Map in hand, we could not figure out where we were! Do NOT trust those directions! Go out the Mass Pike, go to the Thruway, head south, and cross back over the river on the Rip Van Winkle Bridge!

Hudson has a lot stores lining several streets, right off of the town park (more about the park later!) There are a lot of clothing shops and antique shops, many of which seem like Brimfield brought indoors. Though many of the buildings are in need of repair, the buildings are great, with wonderful architectural details. And the different ages of the buildings gives the town an eclectic look. 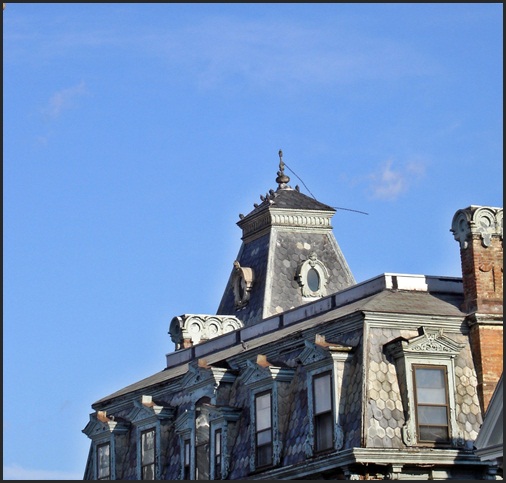 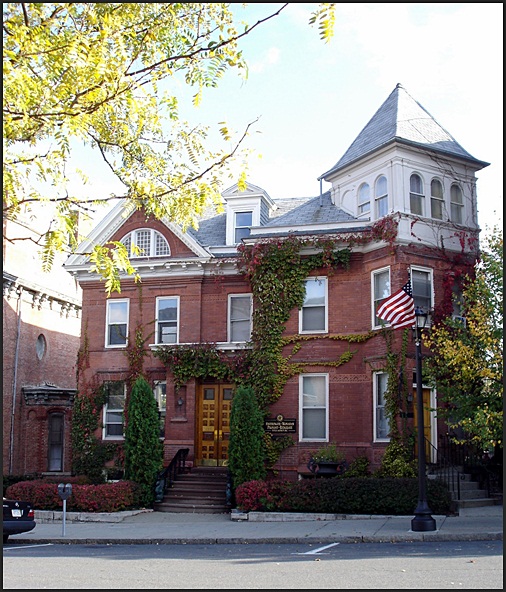 Buildings of all kinds
in Hudson, N.Y. 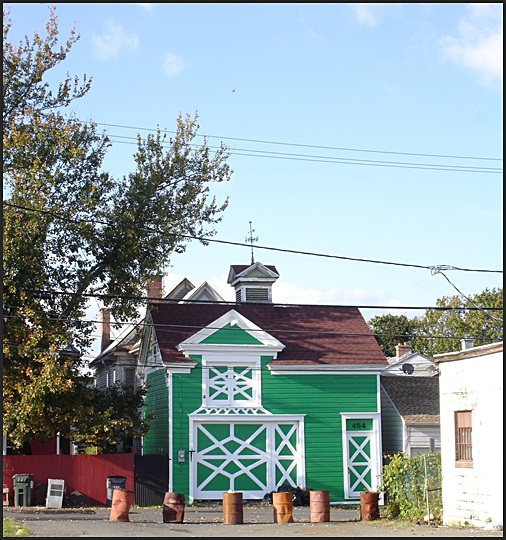 Not being a shopper walking around, and people watching is always fun, especially in a new location! But, one reason we were staying in Hudson was simple: PIZZA. I love pizza. I am addicted to pizza. I will go out of my way for pizza. And there was a restaurant that had designer pizza in Hudson… Be still my heart!

After a quick look around the town, we were ready to assay the Pizza restaurant! Well, designer pizza is not always great… a rose by any other name, etc… Thin sour dough crust that one can not call chewy as it is so tough a serrated steak knife won’t cut it, does not merit pizza greatness. Sadly, we left the restaurant…

We were staying for one night at the St.Charles Hotel, on the park, in Hudson. It is extremely run down on the outside, paper over windows and some were even boarded up. It does NOT look like the web site. The room was a bit odd, but alright, and quite clean.

The next morning the monsoon like conditions of the day before had dissipated. The sky was blue with whispy clouds… a fine wind was blowing. And looking across the green was a building that caught the eye, as it was hung with flags which were breezing out in the wind… 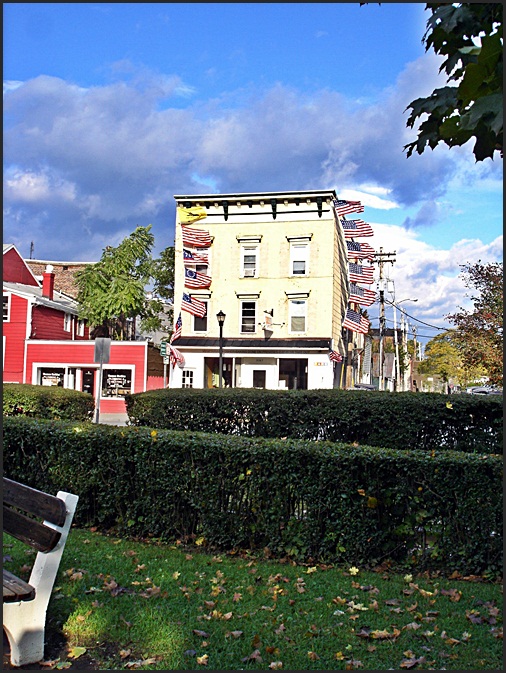 PARK FALAFAL AND PIZZA
Home of the big slice 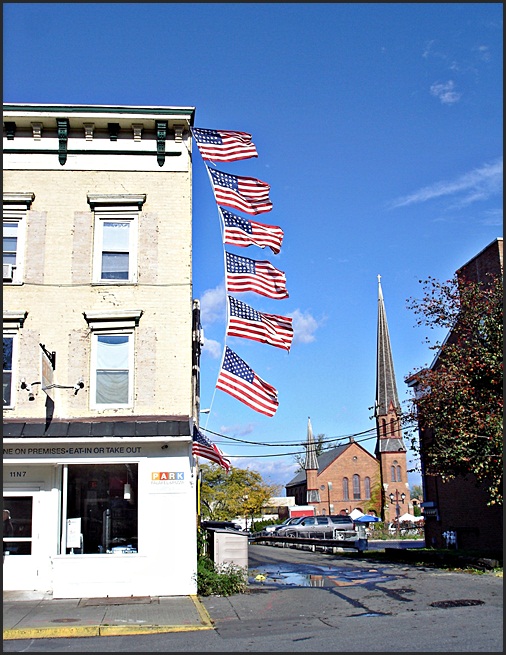 We crossed the green to see what the building was; we read the sign on the window…Park Falafal and Pizza. There was pizza hope again! The restaurant serves vegetarian and kosher food. There are things besides pizza- stuffed grape leaves, falafal, hummus, and other Mediterranean specialties… All things are made right on the premises. There was fresh baklava on the counter… We went in and asked when the pizza would be ready… the pies come out at 11 we were told… we had a way to wait!

We headed back down the street to check on the auction, and then walked up and down a few streets. We came upon a farmers’ market. The Hudson, New York Farmers’ Market runs until November 19. It was a truely wonderful gathering of foods and other items- flowers, wreaths, soap, honey, beer, sandwiches, fruits and vegetables were gathered, and this was mid-October! 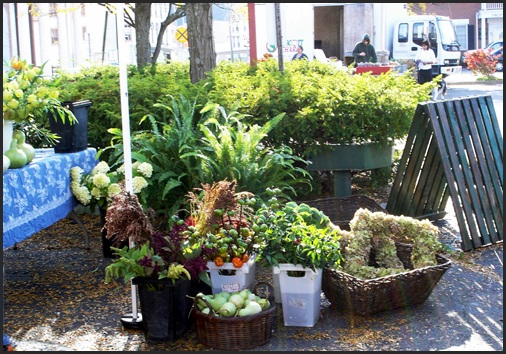 Being October, the apples and pears were in full view. 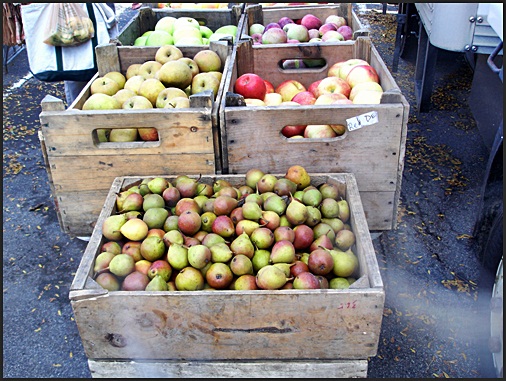 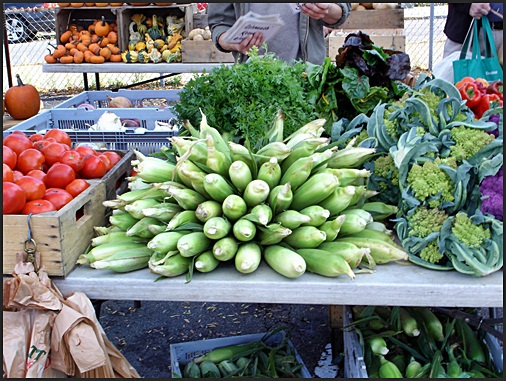 People went out of their way to display the produce in all of its glory! 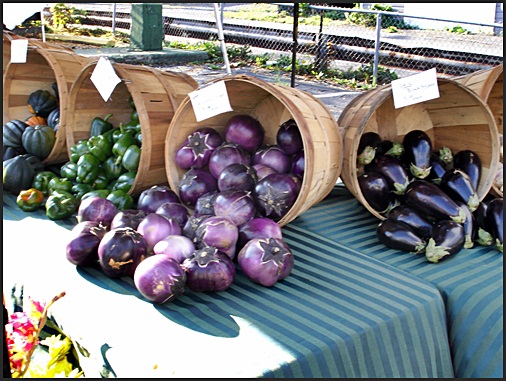 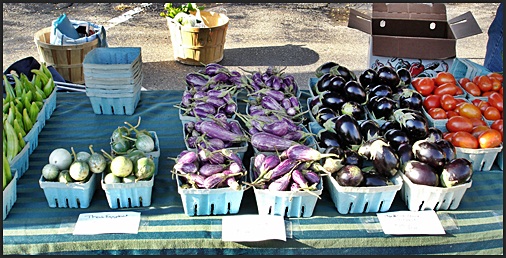 The small lavender ones are Fairy Tail Eggplants…
So cute! If only we could have taken them home!

At 11:00 AM sharp we were back at the Park Falafal and Pizza. We each had a slice of plain… it was fabulous. Thin crust, fresh tasting sauce, and the right amount of cheese! Pizza perfection! The pizza is actually better about 15 minutes after it has cooled, as the crust, sauce, and cheese solidify slightly. 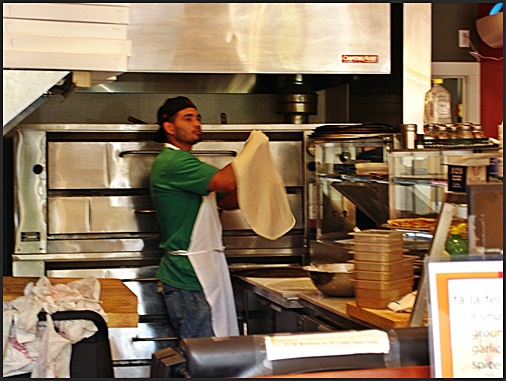 PIZZA IN THE MAKING AT
Park Falafal and Pizza, Hudson, New York

After finishing at the auction we did NOT succumb to more pizza, but headed north to Albany. We were staying in the Hampton Inn, downtown. The location is central, the price a bargain. The day being nice we decided to walk around.

The last time we had been to Albany was a good 40 years ago- maybe more. We were surprised by the town. Albany is a city of towers, steeples, and spires. Everywhere one looks they are there! And it is a city of firsts… many of the churches were the first in the state and some in the nation. The city hall has the first municipal carillon of bells… the list goes on, and on. The architecture fascinating! 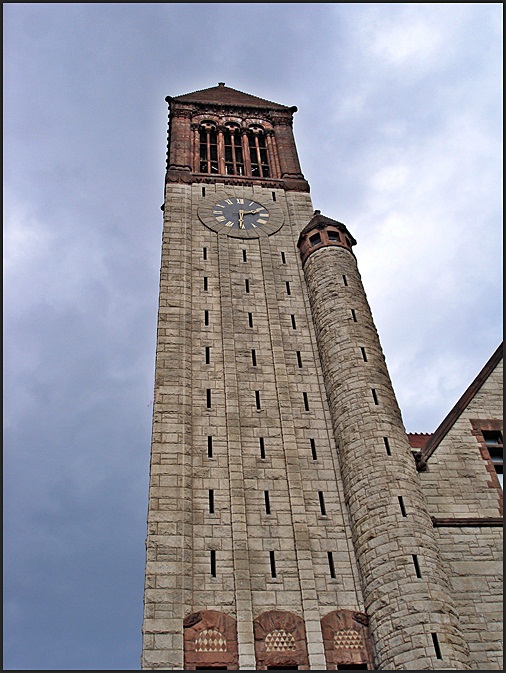 Right up the hill from the hotel is Eagle Street, where a lot of the business of a state capital happens. Many of the buildings are historical, and the place is imposing. The City Hall as it stands today was built in 1883, and has a 202′ tall tower. 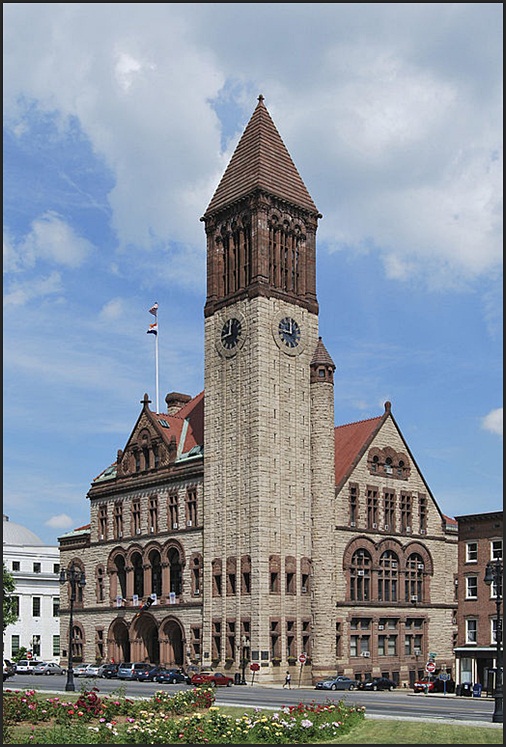 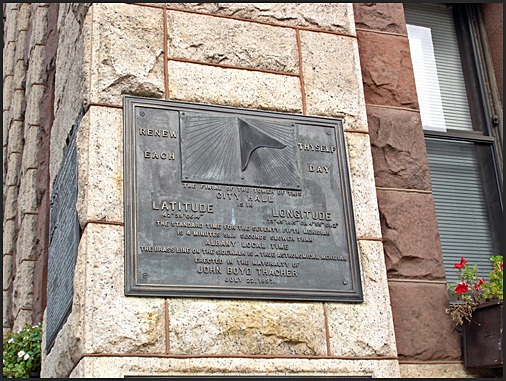 On the side of the tower is a plaque. 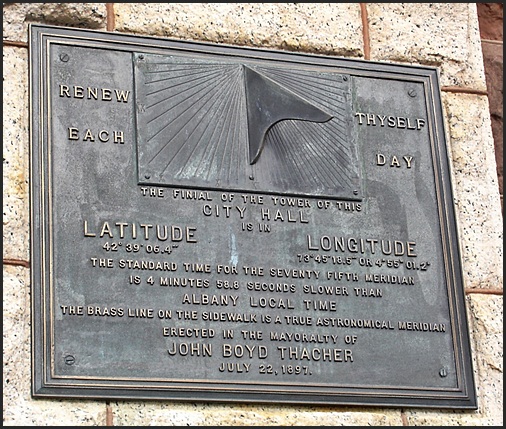 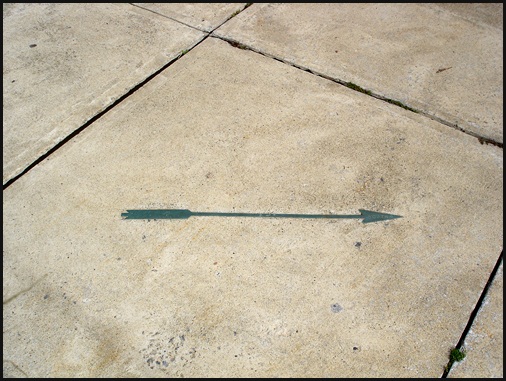 THE SOUTH POINTING ARROW
of the astronomical meridian line
at the corner of the city hall in Albany, N.Y. 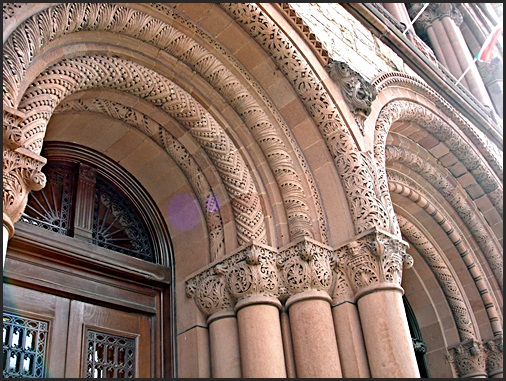 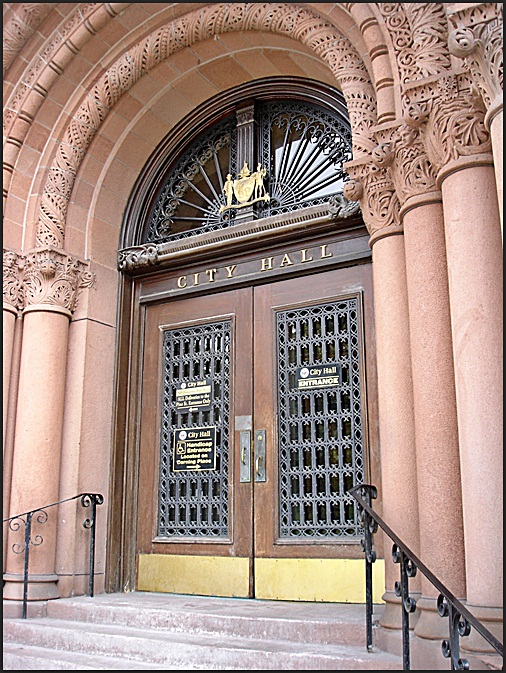 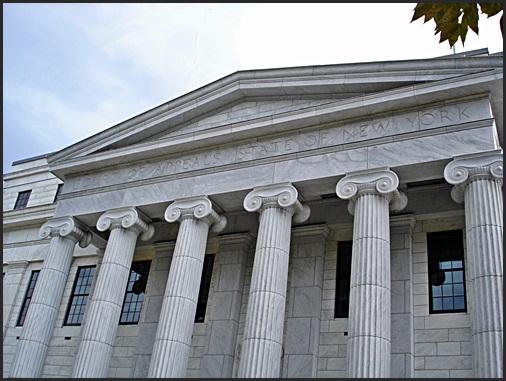 Right next door is the New York state Court of Appeals building.
It is an imposing building. 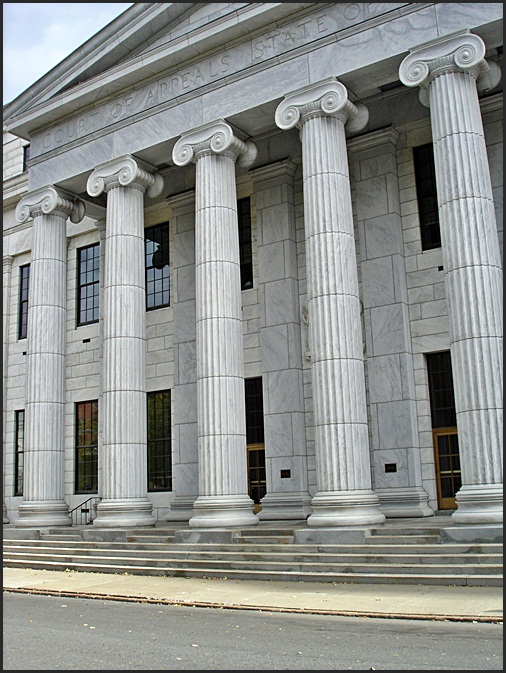 Heading down the hill as the light faded
one could see many spires! 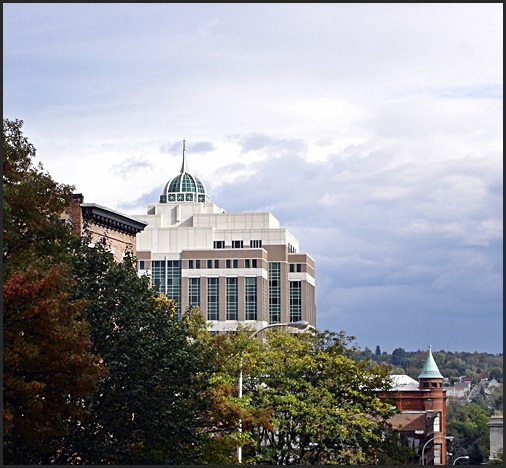 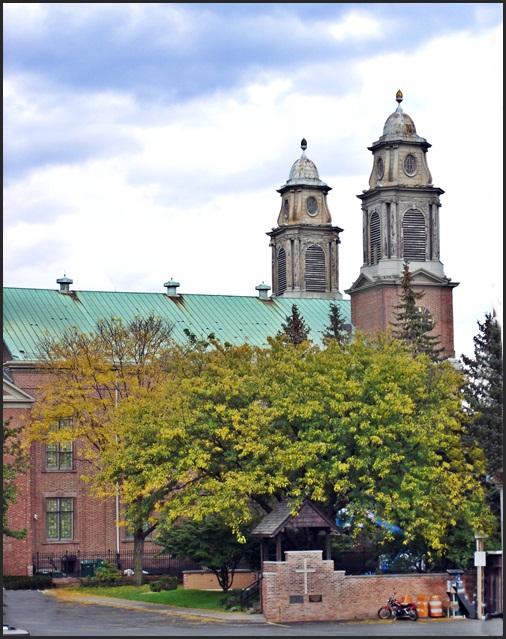 RESOURCES
For more about the best pizza in Hudson, New York see:
http://www.parkfalafelandpizza.com/

To follow Nancy on her blog about Running Creek Farm go to:
http://gardenspotlight.blogspot.com/

The over picture of City Hall is from Wiki Commons.