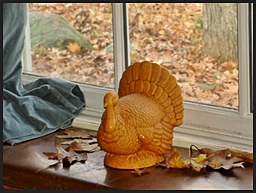 One of the main stays of a Thanksgiving dinner is stuffing. While one can use it at other times, most Americans equate it with TURKEY! But, why not use it for stuffed acorn squash? or serve with a pork loin?

As a long time vegetarian, striking the right balance between what a vegetarian eats and what others want, can at times be challenging.

When I first started making stuffing I was not a vegetarian, and have adapted this to meet everyone’s tastes. I used to alternate this one with one that had sage in it, but this is the one everyone wants…

1 loaf of white bread ( around a 1 lb. loaf )… it should be a dense white, like Pepperidge Farm original white.

2 bunches of parsley- if they are small, washed, with thick stems removed.

2 red apples- ones that will hold their shape slightly, not a cooking apple like a Granny Smith

This, as one can see has a lot of things going on with it!
Preparation starts the day before one needs to use it,
cutting down on some of the work the day of use.
This makes enough to stuff an 11 pound turkey, and fill two casserole dishes.
I use my very large stock pot to mix this.

The day before you need the stuffing toast the pecans.
Place them in a single layer, on a cookie sheet, and roast at 250 degrees until toasted,
stirring occasionally.
Let them cool, and picking them up with one’s hands, squeeze them to break into bits,
and let them fall into a very large bowl or pot.

While the nuts are toasting take the sliced white bread out of it’s wrapping.
Divide the slices into three or four stacks. Cut the stacks into five fingers.
Keeping the stacks intact, rotate them 90 degrees, and cut them again, making squares.
Repeat with the other stacks, and place them into a large bowl or pot.

Take the baguette and cut it into thirds.
Taking a third make slices down, but not through the loaf, at about 1/2″ intervals.
Rotate the third of the baguette, and make two slices long ways, into it;
turn it on its side, and cut off the top.
You will have a bunch of cubes.
Pick up the intact base of the piece, and pull off pieces.
Do this with the rest of the loaf.

Stir the nuts and bread together, cover it, and let it rest until needed.

At this point you are saying this will never be enough…

Trust me, it will be!

THE DAY YOU WILL USE THE STUFFING

Prepare the sausages according to the package directions.
While most of the vegetarian sausages say to just cook in water, and then brown,
I have found that most will stick to the pan.
I have found adding 1-2 Tablespoons of the butter, just before the water is all gone, keeps this from happening.
When they are browned, and rather firm, remove to a plate to cool.
Add the remaining butter to the pan, and as the pan cools down, the butter will melt.
While the butter is melting
chop the onions with a processor, using short pulses, until in pieces.
You don’t want them too small.
Add the onion to the butter in the pan.
Turn the pan on low, and cook until wilted.

Mince half of the parsley in the processor.
Add it and stir well. If the parsley looks sparse, mince more and add it. Pour water in the pan, and stir to make a slurry mix.
Add the tarragon, paprika, and some salt and pepper and stir.
Cook down until things are well mixed and cooked,
adding more water if needed.
This needs to be wet.