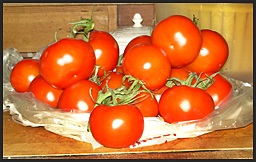 Tomatoes are a staple in most households. One of our favorite ways of putting tomatoes by is to oven dry them and then freeze them in small packages. While most dried tomatoes are hard, with a strange taste, these are soft, and have a deep rich flavor. They can be used in soups, salads, sauces, and sandwiches. And they give a definite lift to winter tomatoes, when used together.

Oven dried tomatoes are extremely simple to prepare,
but they do take a while to dry, eight hours is not uncommon!
It depends on the size of the tomatoes, the humidity, and how many one is drying.
Try to get them all done by July 1, so that your kitchen is not sweltering in August!

OVEN DRIED TOMATOES
One needs tomatoes and olive oil, and time for these
That is it…
While many tomato varieties have been tried,
on the vine tomatoes seem to work the best for this.
Fill a large plastic bag with tomatoes. This will do 1-2 pans of tomatoes.
How many you can do at a time depends on the size of the pans and if you have one or two oven racks.
Remove any stick on tags before washing,
as when wet, the paper peels off, leaving the sticky residue on the tomatoes.
It is almost impossible to remove!
Wash the tomatoes, and let drain. 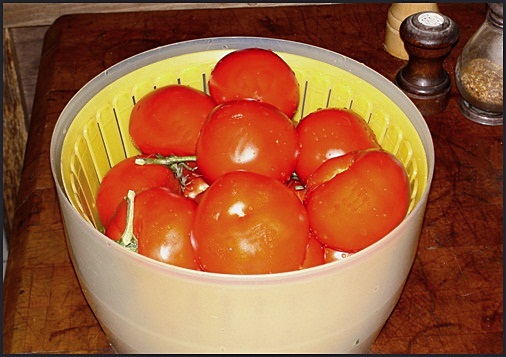 ON THE VINE TOMATOES

While the tomatoes are draining
preheat the oven to 250 degrees F. and arrange the oven racks.
If you are using two racks position them equal distance from the top and bottom of the oven; if one position it just below the middle of the oven.
Get your pans ready.
Pour a small amount of oil in the center of a pan- 1-2 Tb is fine.
You can always add more if needed.
One at a time core the tomatoes, and slice in half, horizontally- around the equator.
Rub the cut sides in the olive oil,
turn them over, and arrange in rows around the outside of the pan.
You need to work toward the middle as that is where the oil is.
While you want to fill the pan you don’t want to crowd the tomatoes,
as that slows down the drying.
If you have two racks, fill a second pan with tomatoes. 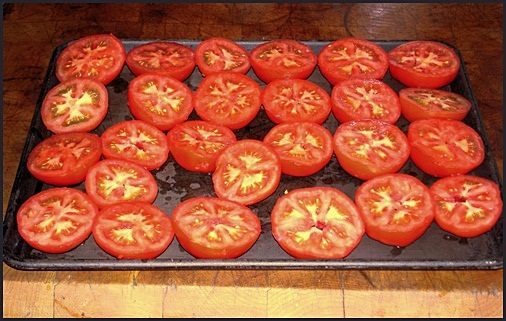 TOMATOES READY FOR THE OVEN

Place the pans in the oven, close the door, and walk away.
Check the tomatoes in about two hours.
If they don’t seem to be moving along, up the temperature in the oven to 350 degrees F. for about 15 min.
Then turn it back down to 250 degrees again.
Continue to check them ever other hour.
The tomatoes should be carmelizing around the edges; some might even be quite dark around the edges.
But they should not be burnt. 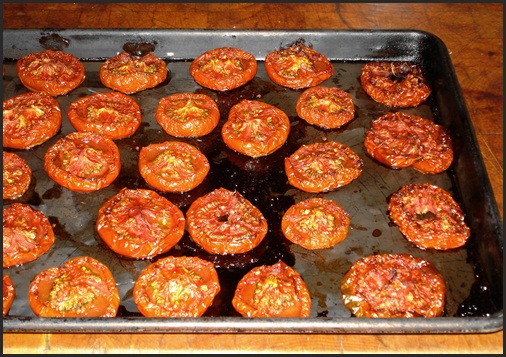 In the picture above the tomato in the corner is ready to be removed,
the center ones are not.
Continue to bake the tomatoes, removing them as they are ready. They should be soft, with carmelized edges, some may even be a little too dry.
Don’t worry- they will be fine! 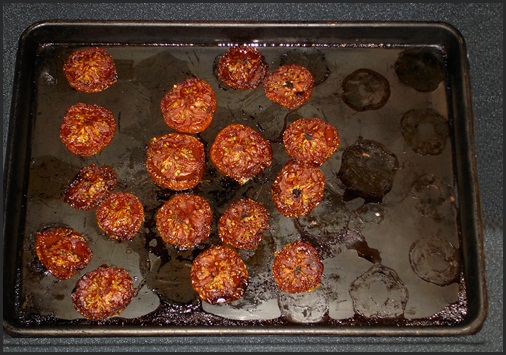 THE TOMATOES ARE DONE

The pan above shows the last of a run of oven dried tomatoes.
While cooling the tomatoes rip off pieces of ssyran wrap.
Stack the tomatoes in sets of five,
place in one corner of a piece of the saran wrap.
Roll them up, folding in the edges, to make a nice tight package.
Place the packages in a zip lock freezer bag and freeze. 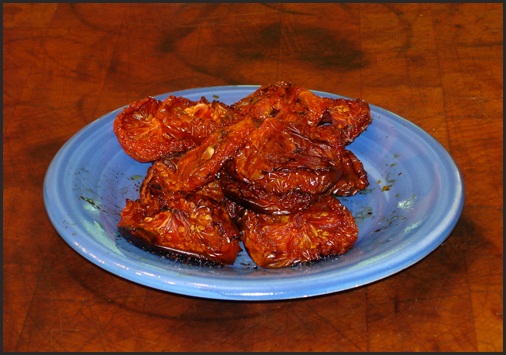 TOMATOES READY TO BE EATEN OR FROZEN

Now that you have spent a full day nursing tomatoes
what does one do with them?
First, try them on French bread with a smear of mayonnaise…
Try them in an antipasto tray…
Add them to salads, soups, or casseroles for a deep rich flavor.
They are wonderful in Mediterranean salads with beans, olives, and basil!

IF FROZEN:
thaw slightly and chop. Or is you wish to use them whole thaw totally and separate.