Light is something most of us take for granted. If color is an attribute, of function, of light, what is light?

Light is energy. It has intensity, direction, and frequency. It is measured in many different ways.  It’s energy is usually measured in electron volts, in red shifts, and velocity unit; speed is measured in kilometers, it’s frequency is measured in Hertz, and its wavelengths are measured in ngstroms and naometers. For something that many of us take for granted it is obviously important enough to be considered from so many aspects!

The visible light spectrum is part of a continuum. It is the electromagnetic spectrum, which runs from gama rays to radio rays. And all of these rays travel in waves, with different wave lengths. A wave length is the distance between two corresponding points on two successive waves… like the top of an ocean wave, to the top of the one behind it. And visible white light is composed of wave lengths from about about 380 nanometres to about 780 nm. Infrared light has a lower wavelength or frequency than a human can see, and ultra violet light has a higher wavelength or frequency.

Think of the electro magnetic spectrum as a river that is gathering speed as it moves. And within it are different currents. And each current has it’s own wave sequence.  And the speed of the movement and the wave length dictates the color of each current.  The part of this spectrum of energy that is visible to man is quite small.  As you can see, the two ends of the visible spectrum merge to black. 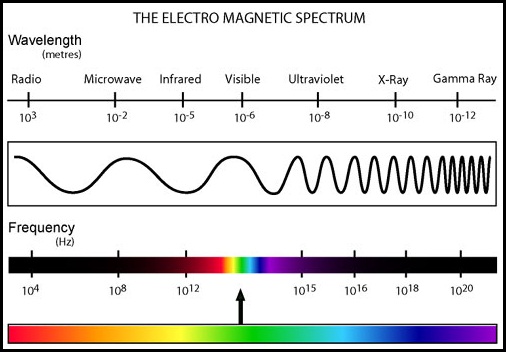 THE ELECTROMAGNETIC SPECTRUM
showing the visible part of the light spectrum

It is only when white light is broken up that we can see the colors of light. When white light is refracted and then reflected, and then refracted again, light is separated, and it’s different wave lengths are visible as separate colors. Refracting is when the ray of light is bent passing from one transparent medium to another… one sees this with a straw in a glass of water, the angle of it appears different between the part of the straw outside of the water and the part of it inside.

Roger Bacon first recognized the visible spectrum in a glass of water,in the 1200’s, four centuries before Sir Isaac Newton (1642-1726) proved that white light was made up of colors. By using a prism he was able to separate white light into different colors. And he went on to reassemble those colors back into white light by using a second prisim.

The colors that occur when light is separated, which are the colors of the rainbow, he named the spectrum, which means appearance or apparition in Latin. At first he only included 5 colors: but later added two more. They are violet, indigo, blue, green, yellow, orange and red. The number of colors corresponds to the ideals of Greek Sophists who felt there were connection between colors, musical notes, the known objects in the solar system, and the days of the week. The blue end of the spectrum has shorter wave lengths, and the red end has longer ones. 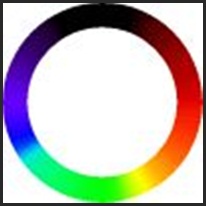 The parts of the spectrum where the violet and the red light waves fade into black are shown, which is what the true color spectrum does.

By wrapping the ends of a true spectrum to form a wheel one has an area of black. 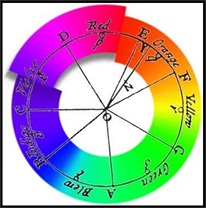 Sir Isaac Newton’s color wheel looked like this. He filled the part between the beginning and the end of the visible spectrum with the  color tones that would be produced if the two ends of the visible spectrum were blended together, getting magenta hues that move from reddish to bluish. These color tones between red and violet are not part of visible light, they are not formed by actual light waves.

This leads to an interesting phenomenum….Sir Isaac Newton after separating light, and defining colors of the spectrum which have wave lengths,  filled the void between the beginning and end of the spectrum,  with colors that were not part of the spectrum.  They  would occur only  if some one were blending the two colors together.

Our brain sees them due to our ability to register more than one wave length color at a time.

Light is part of the elecromagnetic spectrum. It is made up of different light waves.

Sir Isaac Newton, using a prism, separated light into a color spectrum of seven colors, and named them.

He then bent the colors into a wheel, and filled the void between the two ends with colors that are not part of the visible spectrum, in that they are not a product of an actual light wave. They are the colors would would get if the two ends of the spectrum were blended together.