When Sir Isaac Newton separated light into color, by using a prisim, he launched a whole new branch of science about how we see color. Color theory and physics are closely allied. But how we are able to percieve color is its own field of science. And it centers, naturally around our eyes.  What follows is more than most people want to know about color and  how eyes work. But, it explains why some people see salmon while others see pink! 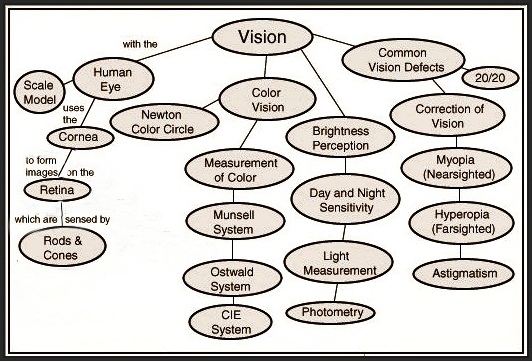 Light passes though the outer layer of the eye, the cornea, where it is refracted, and ultimately it reaches the retina, which is the light sensing structure of the eye. Within the retina are two different types of cells that sense color. These are rods and cones. There are approximately 120 million rods in an eye, and about 6-7 million cones. The rods are responsible for low light vision. and the cones for color and detail.

Rods are stimulated by low light conditions, not by color. They register black and white.  Cones are stimulated by color and record color and detail. One can think of it as the rods being responsible for night vision, and the cones for day time vision as the rods do not work in daylight, and the cones do not work well at night. The cones recognise, and respond to changes of light and its quality- such as the changes of light through a window as it moves, or from bright to dim light of artificial lighting. They respond to the different wave lengths of the visual spectrum. Their response time to light stimuli is faster than rods, making adjustments to changing light levels quickly.

The outside of the rods and cones contain photosensiitive chemicals. In rods this is rhodopsin; in cones the chemicals are called color pigments- each cone type having its own color pigment chemical.  Light hitting the photosensitive chemicals of the rods and cones causes the chemical to decompose. This happens in less than a trillionth of a second. It is broken down into several compounds which reform into a chemical that causes an electrical impulse to be transmitted to the brain where it is interpreted as light. 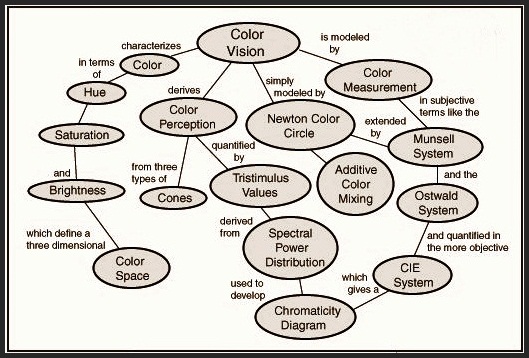 HOW WE SEE COLOR

MOST PEOPLE are TRICHHROMATS (WHAT?)

Most people have three types of cones, making most people trichromats. These different types of cones sense either short wave lengths, medium wave lengths, or the long wave lengths. These are designated as S, M, and L cones. Or, to put it another way most people have cones that distinguish between the different wave lengths that form the colors. These are usually designated as cones that sense blue, green, and red light waves. It is helpful to not think of them as cones that perceive color, but as cones that perceive light waves… as you are now saying- “But, what about yellow?”. Approximately 64% of the cones sense long lightwaves, 32% a midrange of light waves, and 2% short light waves.  The color yellow, for example, is perceived when the L (red) cones are stimulated slightly more than the M (green) cones, and the color red is perceived when the L (red) cones are stimulated significantly more than the M (green ) cones.

The green and red cones are packed together in one area of the eye, and the blue cones are mostly outside that area. While they are the most sensative of the cones, their numbers are so much fewer, and where they are placed within the eye leads to interesting things about how we see blue. But, more about that later!

People see more colors than just red, green, and blue,  because of the amount the cones are stimulated. Depending on the amount of light, and how many of the cones of each type are stimulated a trichromat can see   Each of the three cone types in a trichromatic human retina can pick up about 100 different gradations of color, and the brain can combine those variations so that the average human can distinguish about 1 million different colors. That is a lot!!!

At moderate to bright light levels where the cones function, the eye is more sensitive to yellowish-green light than other colors because this light level stimulates the two most common of the three kinds of cones almost equally. At lower light levels  the eyes sense the shorter wave lengths of blue and green cones more than longer wave lengths, resulting in a perceived color blueish-green color.

This accounts for the changes in how we percieve color as the daylight changes. We actually see less yellow at dusk or in a dim room than blue… so in the evening the short wave lengths (blue) of light stimulate the cones that perceive blue tones of the short wave lengths more than the longer wave lengths.  are heightLook at a fabric with yellow flowers and green leaves at mid-day in a bright room and your perception of the colors will be very different than if you view it in the late afternoon. Late in the day the blues of the green leaves will be more prominate, changing the whole effect of the fabric.

Each of the three cone types in a trichromatic human retina can pick up about 100 different gradations of color, and the brain can combine those variations so that the average human can distinguish about 1 million different colors. But there are people, birds, animals, and fish who have more or fewer types of cones.

A tetrachromat is a woman who has a fourth set of cones. Why just women? The gene for the pigments of the green and red cones are carried on the X chromosomes, and only woman have two X chromosomes.  So, some might have two sets of red cones or, even rarer two sets of green cones, one carried on each of the X chromosomes, with that would react to different wave lengths. That might mean they could see four distinct color ranges, instead of three; for instance orange light waves might be able to be perceived. For them orange would not be a byproduct of two different types of cones being stimulated by light, as is the case with a trichromatic. They would actually perceive the wave lengths that produce the color orange. That would mean they would be able to see about 100 million colors. But, the visible light waves of the two groups of similar color cones that the tetrachromat might have, might be so close together,  that there might not be any discernable difference in color perception.

About 8 percent of the world’s men have color deficiency, or color blindness. And there are many different types of color blindness.  Usually it is due to an extra fourth cone that duplicates either the first red or green cone, so that when the cones are stimulated they are getiting a double dose of chemicals, from the same colors of cone fired to the brain, resulting in them not being able to see the color of the cone that is not duplicated. So, if you have two sets of green cones, you would not see the color red. There is of course also yellow/blue color deficiency, where the short light wave cones are defective. The yellow /blue color deficiency can happen to both men and women.

The circle on the right is what a person would see if they did have a red/green color deficiency.

The basic types of color blindness depends on many factors. It can be related to either cones or rods.

MONOCHROMACY is when only the rods are functioning.  This can be due to cones being defective or to the lack of them, which causes total color blindness.

DICHROMACY is when only two sets of cones are functioning. There are three types of this color impairment. They are protanopia, deuteranopia, and tritanopia. These are broken into two different types of groups. One is when it is true color defect and another type of color blindness that is considered an impairment, where the sensitivity of the cones is questionable, but still functioning. With each of these one of the groups of cones is missing or impaired.

And with tritanopia the blue yellow, or short light waves are effected.

Below: how the color spectum is seen by people with the different inherited color difficiencis.

THE COLOR SPECTRUM
VIEWED BY A PERSON WITH
PROTANOPIA

THE COLOR SPECTRUM
VIEWED BY A PERSON WITH
DEUTERANOPIA

THE COLOR SPECTRUM
VIEWED BY A PERSON WITH
TRITANOPIA

There are many different species of birds, animals, and fish that have differing eye cones and rods. Bees have three sets of cones, but they lack the red cone. They can however see lower light waves than the blue. They can see ultraviolet coloring.  Papilio butterflies possess six types of photoreceptors and may have pentachromatic vision. Birds and fish have more complex color receptors than mammals as well.  Most birds are tetrachromats, having four sets of cones.  While marine mammals have vision developed for low light conditions, and are, for the most part, monochromates, with just a single cone type. Some invertebrates, such as the manta fish, see a different span of the spectrum. As well as red, blue, and green light waves they can see the colors of ultra-violet light. The most complex color vision system in animal kingdom has been found in stomatopods (such as the mantis shrimp) with up to 12 different spectral receptor types thought to work as multiple dichromatic units. Which brings us to mans best friends: dogs and cats.

Dogs and cats have only two sets of cones, they do not see the red end of the spectrum. They have dichromatic vision. The spectrum of color they percieve is shown below. 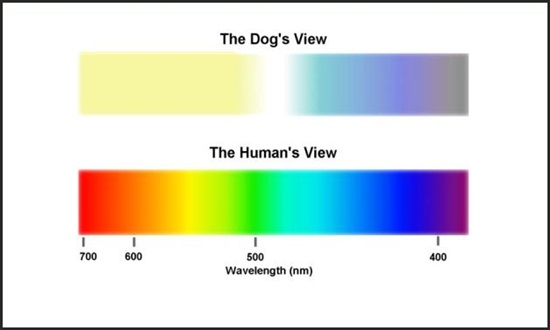 Dogs vision, like mans, also depends on many other factors. Size of pupil, arrangement of rods and cones, acuity, and more. They also have a very wide field of vision, due to the eye placement.  But both dogs and cats respond to motion. For them color is less necessary than for other animals, birds, insects, and fish who need color to see if fruits are ripe, flowers are mature,  and other necessities for survival.

The bottom line is no two people perceive color in the same way. It is too individual… the number of  rods, the placement of the cones, the amount of color pigments, the amount of chemicals being released by the rods and cones, how your brain processes the chemicals… it is no wonder people argue about color! Then add in the difference that levels of light make, the longer wave lengths being more visible in high light, and the blues being predominante in low light leves… it is a wonder anyone can agree on anything about color at all!

But, the point is – how a person percieves color is dependent on light, physiology, eye make-up, health, body chemistry, and more. Which explains why what one person sees as pink, another sees as salmon. Color, in truth does not exist outside of the brain! 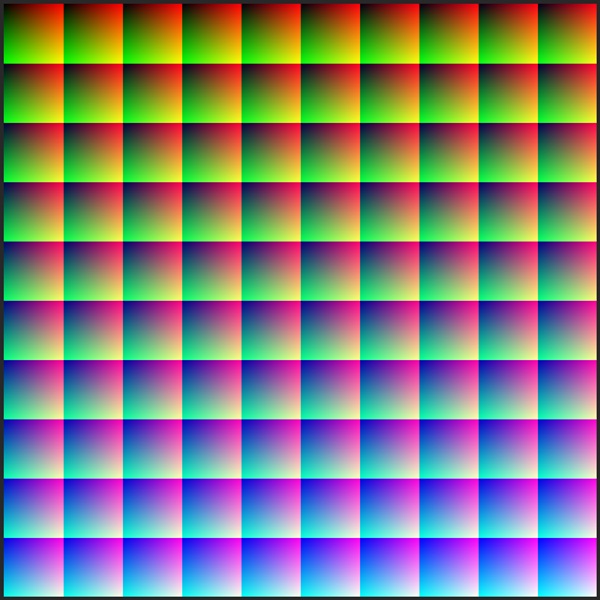 When viewed in full resolution, of 1000 pixels, there are 1 million different colors.
Each pixel is a different color! But the human eye is capable of distinguishing many more times that number of color!

Charts are curtesy of the University of Georgia, department of Physics and Astronomy